In July, we had another combination vacation and family history trip.  Is there any other kind of vacation?  This time, I was exploring my Gaetz roots in Nova Scotia.  My ancestor, Johann Martin Gaetz, arrived in 1751 as part of a group of “Foreign Protestants” from Germany who were invited by the British to create settlements.  My ancestors settled in Lunenburg, which is now a UNESCO World Heritage Site.  I had a family tree from my mother, her notes, and plenty of information from online sources, but I had never been to Nova Scotia.

My grandmother, Florence Elizabeth Gaetz, came down from Seaforth, Nova Scotia to Providence, Rhode Island in 1918.  My mother stayed in contact with a first cousin and his family.  They visited each other several times over the years, but I never met the family.  Prior to the trip, I was able to connect with a second cousin, Pat Gaetz.  Pat, and her husband, gave us a wonderful tour of the family roots in the Halifax area.

We were able to see the house where my grandmother lived, which solved the mystery of a framed photo on a wall at my parent’s house.  None of my siblings knew what it was, but you don’t frame a random photo and hang it on the wall.  What a great surprise when saw the house!  I’ve written that on the back of the photo for future generations.

Pat took us to eat at a very small, local restaurant called La Cuisine, in nearby Chezzetcook.

As we were chatting with the owners, it turns out one was a Gaetz second cousin and the other married to a Gaetz!  Our second great surprise of the day.  To top it off, we saw the dessert menu highlighted gingerbread.  We  had wondered about the origin of my mother’s gingerbread.  Sure enough, the gingerbread was very much like hers.  Her love of molasses and gingerbread certainly came from the area.  Three mysteries solved in one day!

As for sightseeing around Nova Scotia, we thoroughly enjoyed our trip.  We arrived in Yarmouth via the new Nova Star ferry from Portland.  It was a “cruise” experience as opposed to just a ferry.  I would recommend it.  All the places we visited were great.  I’ve highlighted our main stops on the map below.  Nova Scotia was beautiful.  The weather was great, except for the last day with a visit from hurricane/tropical storm Arthur.  It made our ferry back to Maine a bit choppy the next day, but not too bad. 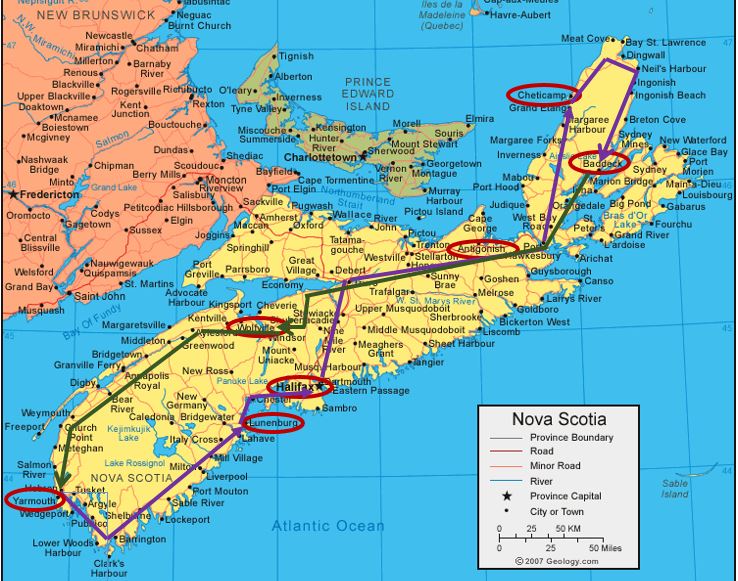