Searching for a Sweeney link from Leitrim back to Donegal

My brother, Ted, and I made a trip to Ireland in May.  We had fantastic visits with our McPherson and Brennan cousins, as well as our friends, the Clarkes.  Gerry Clarke has been a great help in our family research over the years.  We saw the old Sweeney (Leitrim), Horan (Sligo), and Brennan (Roscommon) cottages.  We found out more about our great uncle, Thomas Sweeney, through stories over tea at neighbors.  We also had a nice visit with Michael Mohan, whose family bought the Sweeney property adjacent to theirs.   It was another amazing visit.

We spent a couple of days in Dublin before departing and I couldn’t resist a little more genealogy research.  I found the death record of Thomas’ wife, Mary Agnes Foley, from 1963.  She was the last Sweeney to occupy the cottage in Gubnaveagh.   I was also able to trace back the first ancestors to live on the mountain in Gubnaveagh.  I got a copy of the original deed from 1807 when the Gannons acquired the property.  Terence Sweeny married Bridget Gannon in 1867.  Soon after the marriage, the Gannons divided the property in two and the Sweeneys were entered into the land records.

So, when did my Sweeneys arrive in Gubnaveagh?  John Sweeney is listed on Terence’s marriage record as his father.  John may have been born around 1810 and died in 1875.  However, I can’t find his birth record.  I have a possible marriage record.

It is documented in local history that a group of people came down from Donegal to Leitrim around 1795.  There is a monument to the Ultachs on the mountain. 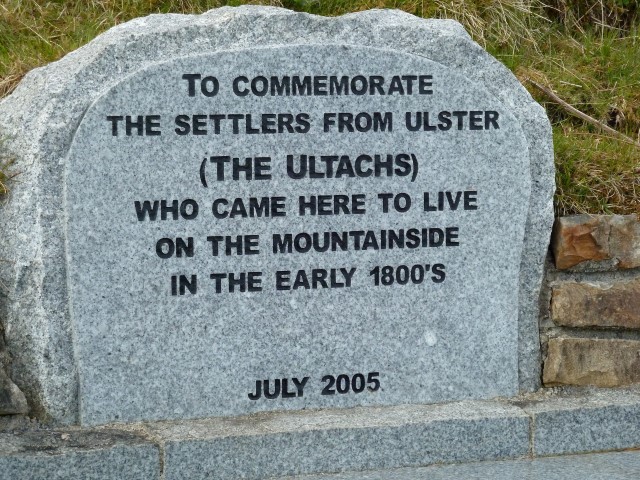 There were Sweeneys in the group, but I’m not sure if my Sweeneys were among them.  Did John’s father come from Donegal in 1795 or did John arrive later on his own?  I think I can only resolve this with the help of DNA testing.  I have found four distinct Sweeney lines in the area, but can’t push any of them back far enough to see how they might be related or where they came from.

I have a 111 marker Y-DNA test, an autosomal test, and the Big-Y.  I’m looking for ideas as to how I can find out if any Sweeneys in Donegal share my DNA?  Most of my Y-DNA matches are from much further back in Scotland.  I am in the Sweeney DNA and Ulster DNA projects.